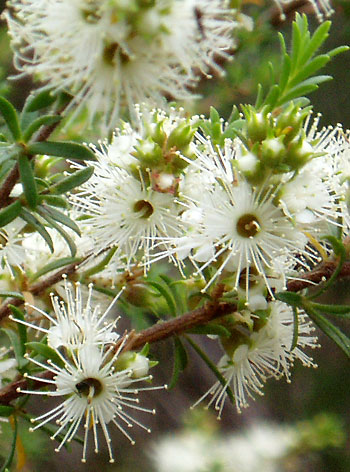 This Tasmanian essential oil is recognized by the Australian Therapeutic Goods Act as an external treatment for ear, nose and throat inflammations and infections and more...

Kunzea ambigua is a tall spreading shrub 2- 4m high. It is sometimes confused with Tea Tree (Leptospermum), but is distinguished by the ‘fluffy’ appearance of the flowers, caused by numerous long stamens. It is fairly common in heaths and woodlands on sandstone.

The leaves are tiny, 5-12mm by 1-2mm, crowded on short lateral branches and covered in oil dots.

The white flowers have 5 petals which are almost hidden by the many longer stamens when the flower is open. They are very attractive to butterflies and several kinds of pollinating flies. Flowering season: October to December.

This Tasmanian essential oil developed by John Hood in the 1990’s is recognized by the Australian Therapeutic Goods Act as an external treatment for ear, nose and throat inflammations and infections; for common respiratory ailments; to reduce pain, for muscular and joint conditions; and for the relief of minor conditions of anxiety and depression. Alleviates skin conditions such as eczema and rashes, in people, as well as pets.

Dr. Daniel Penoel MD, the French doctor and practitioner of Aromatic Medicine has discovered the most important properties of the oil are revealed through its internal use, to great effect in many case studies. In Australia, oral intake of essential oils is not practised, unlike the long standing medical application in France.

The most striking aspect of this oil is the presence of a pool of C15 molecules, 5 of them in fact, which are really important where inflammatory reactions need to be modulated.

“Truly the results obtained over several months of using this oil have been impressive. For example, I had a female patient with Crohn’s disease of some 15 years duration. It had reached a level of serious destruction of the bowels.

My intention was to help her overall condition. She had previously been a jogger but had had to give it up. She began taking Kunzea oil internally and after 10 days felt a deep change. She began to run again and could now run up to 10 km. She was also struggling with food disorders and after a month had changed her attitude and gained more control. Ultimately she was able to make major decisions in her private life.

This shows the part Kunzea oil can play as a complementary treatment in difficult medical conditions.”

Because essential oils in France are used in a medical and pharmaceutical way, Dr. Penoel was able to clinically demonstrate the incredible therapeutic capacities of this oil when used in its fullest medical ways.

Individuals may use Kunzea for self-help health care for:

“…The discovery and study of the South African aromatic plants scheduled for future trainings have therapeutic qualities that will aromatically connect individuals and medical patients/clients with the immense, unsullied form of healing energy coming from “the cradle of mankind”.

However, at this stage, what is occurring with medical research projects on Kunzea and Fragonia, in France, is bringing confirmation  of superior results from the veterinary medical field.

In this regard, nobody can speak of any ‘placebo or suggestion’ effect. Once the owners of the pets observe hopeful results, they are overjoyed to see their normally devastatingly ill best friends being rescued from their ‘scientifically predicted fate’, then they start saying, “Hey! What about us humans ? Who is the Doctor that we should see to be treated in like manner for our difficult medical conditions ? “

[As a doctor], the most comforting thing was getting proof from my Vet doctor [associate] that, after having done research with Kunzea alone – as any intial research should be done anyway – he started to add Fragonia on my advise. Consequently, he has seen [a real] difference with an increase and improvement of healing results.

Kunzea has… significant influences on the emotional, psychological, and spiritual realms of being. Whereas Fragonia™ brings the Yin aspect, Kunzea imparts the Yang element. You may combine 2/3 Kunzea + 1/3 Fragonia™ for morning and noon use; and 2/3 of Fragonia™ + 1/3 of Kunzea for evening use

The marriage of Fragonia™ and Kunzea…brings a higher, more powerful healing experience to all levels of one’s life and consciousness.

It has become clear why a special oil from Tasmania and a precious oil from Western Australia should be used in combination to accomplish miraculous results.

A world renowned medical Aromatherapy expert, Dr. Daniel Penoel is one of the pioneers of the therapeutic uses of essential oils, the cornerstone of his practice since 1977. He is highly respected in the medical world through his rigorous approach to teaching and clinical work. He continues to research and author books on the applications of essential oils in medical and holistic settings. As a medical adviser he is regularly invited to lecture at major International Institutions and Conferences.

He is the founder of Medical Aromatherapy and has taught across Europe, USA, Australia, Japan and Canada over 15 years. Dr Penoel is also the founder of Quantum Aromatherapy® a brand new concept which revolutionizes our way of understanding and using Aromatherapy through the ‘double understanding’: the corpuscular approach and the undulatory approach. He may be reached via penoelschool@gmail.com