"How I can order an additional jar. I am almost out, it is working and I hate to run out." ~LYPOS customer
"I would like to order another jar of Lypos. It’s working very well, but it was a very large lump (but now much smaller)." ~LYPOS customer

"the symptoms only lasted a day instead of the usual 5/6 days. So it worked really well" ~StandingTALL customer

"I am happy to report that my bouts of vertigo have disappeared. Family has commented on how much better I am doing." ~StandingTALL customer

"By the next morning, the swelling of her lips and mouth had subsided, the tissue tenderness was greatly reduced" ~TRINITY Customer

"Put BONZ on it daily since I received it. My big [ankle surgery] incision…been closed, scab free for days!" ~BONZ Customer
Menu

Jojoba ‘Oil’ (pronounced “ho-ho-ba”) is not really an oil but a liquid wax. Because Jojoba is composed of wax esters, it is an extremely stable, long lasting substance, and does not easily deteriorate or turn rancid. Jojoba is considered THE premium carrier for essential oils and is a luxurious emollient treat for the skin. Being the least greasy carrier oil, it’s the best choice to use as an essential oils perfume base.

EXTERNAL USES:
Jojoba – the miracle treatment for softer, supple, silky smooth skin – has some amazing properties! A fine odourless non-greasy oil, it penetrates quickly, is a good moisturizing conditioner, and nourishes ALL skin types – especially mature skins. Over time, the use of Jojoba oil significantly changes the appearance of pore size. For this reason it’s frequently used in skincare and cosmetic products and makes a great makeup base.

Use Jojoba to treat dry, chapped, and cracked skin. It has the ability to minimize fine lines and wrinkles, enhancing skin suppleness while assisting with the rejuvenation of the skin and forms a non-greasy, non-tacky layer with exceptional trans-epidermal water control. Jojoba is well tolerated by people with skin problems. It does not aggravate acne or clog pores, effectively helps break down sebum in plugged-up poreswhile balancing sebum production..

Because of Jojoba oil’s deeply moisturizing qualities, It can be massaged into the hair and scalp, preventing dryness and dandruff. It can also be used for dry, damaged and over-processed hair, either cold or warm as a hot oil treatment. Apply the an amount about the size of a dime in the palm of your hand and spread evenly on hair as a dry hair, leave-on-treatment, to control frizz. It also helps heal eczema, cradle cap in infants, is excellent for general hair & scalp repair. 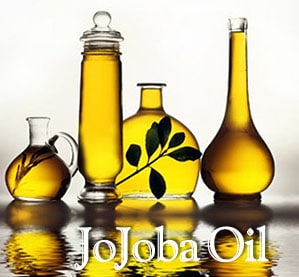 Analysis of JOJOBA Oil
The structure of jojoba oil closely resembles your own skin sebum – your skin’s lubricating medium. It has a natural affinity to our skin is readily absorbed without making the skin greasy or tacky.

Jojoba Used Medicinally
Not only does jojoba oil have amazing emollient and lubricating properties, but a range of therapeutic qualities as well: Native Americans extracted oil from jojoba beans as a treatment for cuts, sores and bruises, as well as sunburn.

It’s anti-bacterial, anti-fungal. Five of the most common skin bacteria plus certain skin fungi can’t survive in jojoba oil. In university tests, jojoba oil destroyed the bacteria staphylococcus and pseudomonas within 1 hour and 15 minutes. Other studies in Israel have shown that jojoba oil relieves the symptoms of psoriasis.

* Jojoba Oil contains vitamins E and B complex. It also has the minerals silicon, chromium, copper and zinc. It has a very high percentage of iodine, almost 81.7%. The iodine concentration gives the Jojoba oil a great power to heal.

JOJOBA FACTS:
* Jojoba is a an evergreen desert shrub whose seeds contain a natural odorless, colorless, valuable liquid wax used in cosmetics, lubricants, etc.
* Jojoba Oil is high in Vitamin C, as well as possessing sulfur, copper, cobalt and has traces of tin.
* A versatile carrier. Prolongs shelf life of essential oils products.
* Jojoba is highly penetrating as it closely resembles human sebum. Widely used in different personal care and cosmetic products, especially to treat dry skin.
* Jojoba Oil is anti-inflammatory, and an anti-oxidant. Can help heal acne, pimples and warts, mouth sores, cuts, athlete’s foot. The oil also helps to remove build up around hair follicles, making it helpful for dandruff, hair loss and dry scalp.
* Jojoba is found in the ingredients of many shampoos and conditioners, due to its beneficial effects on the scalp and hair.
* Jojoba soothes and helps to remove wrinkles and stretch marks.
* Jojoba acts as a tonic, emollient and moisturizer.

Info adapted from http://soaperschoice.com/soapoils/jojoba.html
* * *
Several on-line resources for purchasing ORGANIC Jojoba Oil:
Simply type “organic jojoba” into your browser to see what you can find.
The BEST Pricing I found was $21.50 for Golden (unrefined) Jojoba, 16oz – http://www.herbalaccents.com/carrieroils.htm
NOTE: There’s a $25/min order