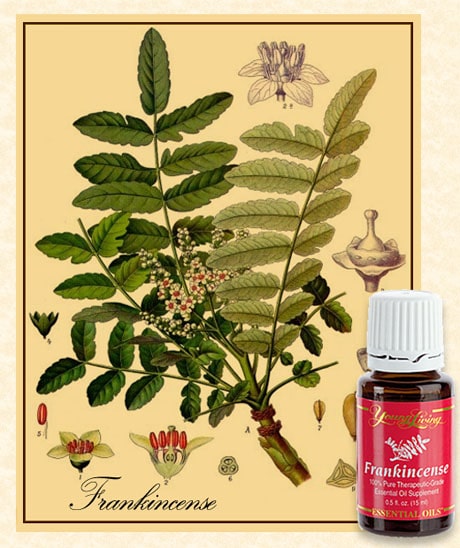 "... when the DNA code within the cell's nucleus becomes corrupted," he says. "It seems frankincense has a re-set function.

Received an incredible testimonial about Frankincense via email that I want to share with our readers right away, especially those of you who may be facing serious challenges in your lives or who know other folks who are.

This woman’s testimonial is corroborated by a recent BBC article on Frankincense’s effectiveness published FEB 2010.

Here’s an excerpt: Immunologist Mahmoud Suhail is hoping to open a new chapter in the history of frankincense…
“… when the DNA code within the cell’s nucleus becomes corrupted,” he says. “It seems frankincense has a re-set function. It can tell the cell what the right DNA code should be. “Frankincense separates the ‘brain’ of the [damaged] cell – the nucleus – from the ‘body’ – the cytoplasm, and closes down the nucleus to stop it reproducing corrupted DNA codes.

*   *   *
Cynthe’s COMMENTS: Scientists tend to take the typical pharmaceutical approach of attempting to isolate Frankincense’s active anti-disease compounds, leading to problems with other chemical constituents that may cause other health issues (allergic reactions), when used singly. We need to respect these incredible essences, learning to use them WHOLE  just as Source has wisely created them.

*   *   *
Just received additional info on Frankincense.  But, first, a bit of background on the following comments & testimonial…

At an educational convention in 2010, attendees gathered to exchange personal healing stories using these immune supportive products. Here’s more information from Dr. Suhail (the scientist quoted in the BBC article), who was a guest speaker:

“Dr Suhail, mentioned in the article, was at the convention for the whole time and gave a presentation along with being on a panel….I ran into Dr. Suhail at the farm and he gave me and the people I was with some Omani frankincense nuggets. We chewed them and it was quite pleasant, even though I was trying to get it out of my teeth for the rest of the day.

While he works in Oman as a physician, he said they can’t do clinical cancer research there because nobody* [in Oman] has cancer. There are NO cancer units at the two hospitals there. He sees 1 or 2 people with cancer every couple of years and I think he said those are people who have lived outside the country. The local people chew the frankincense resin and also soak it overnight and drink the water, so it is very much a part of their lives.

Yes, the scientific researchers are always looking for the one ingredient that is the magic bullet… and perhaps there is value in that for something. However, I agree with you that the magic is in the wholeness, not the parts. I’m sure Dr. Suhail knows that too, as he spoke a lot about the healing properties of the resin and oil.”

Don’t remember if he said ‘all of Oman’ or the area he’s living in (I think he’s in the capital, Salalah). Don’t think Oman is very big, though. I think Dr. Suhail said there were around 2 million people in Oman.

Just did a little Google search. * This article from 2006 says that they get 1,000 cases a year in the country [Oman], mostly breast, prostate and childhood leukemia.

So apparently, there is some cancer there, but not nearly at the rate of the rest of the world. This rate also might be a reflection of the more “modern” people who travel and have a more Western lifestyle.
~ BR

[An acquaintance] I was chatting with called someone over to share her oil story with me. I was very moved as I listened to this woman’s account of her experience with cancer, its recurrence, and how frankincense…literally saved her life.

She told me that she’d been previously diagnosed with breast cancer, used frankincense…and the cancer went into remission. The cancer came back with a vengeance after seven years. This time it was affecting many areas of her body. I can’t remember exactly, but I think she mentioned the brain as well as other areas.

After receiving chemotherapy and radiation treatments, the doctors told her that there was nothing else they could do and that she had six months to live. She started using frankincense…aggressively. She “rubbed it all over” [her] body and took six capsules a day.

She said….she owed it to her family, and especially her children, to fight for her life. And that since she’d succeeded in beating the cancer before, she could do it again. I think it’s very significant that this woman was empowered with a strong belief in healing herself and didn’t collapse under the death sentence of the doctors. I don’t remember the exact length of time…she marinated in and ingested frankincense oil, but I think she said that in 1.5 months she was cancer free.

I will try to reconnect with this woman and get a more complete report. If I can do that, I’ll pass along what I find out to you. Of course, everyone is different. One person’s life path and healing will not necessarily be the same as another’s. But what a great inspiration to know…we have such precious healing substances right at our fingertips and can freely share with others whose health and lives could potentially be transformed just by receiving this information.

Various species of Frankincense have been revered for thousands of years and were used in ceremonies & traditional rituals as incense to improve communication with Source / Creator / God / Spiritual Guidance….whatever term is meaningful to us. The ancient Egyptians also used Frankincense to fumigate their homes, as a general cure for all diseases, in cosmetics, perfumes,and embalming.

If you are interested in where I source therapeutic oils, please contact me to learn more. For more information on alternative, integrative protocols, read this article about two innovative medical clinics in north America.