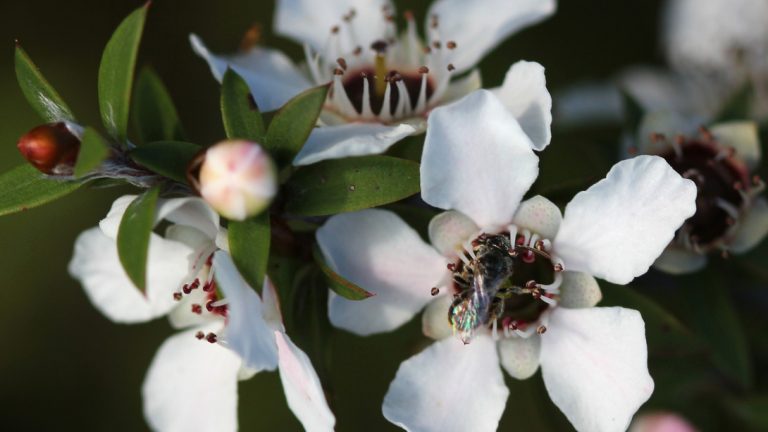 This fairly recently released western Australian essential oil with a unique bush fragrance and anti-microbial properties was… unknown to aromatherapy until Dr. Daniel Penoel was introduced to this “new” essential oil, when it was brought to France for Dr. Penoel’s [gas chromatography] analysis.

Fragonia is distilled from a small shrub found on the south coast [of Australia] commonly called ‘coarse tea-tree’ by the cut flower industry.  A very special oil, it unblocks the emotions, bringing peace and calm. Emotional peace. Balancing.

Dr. Penoel has found Fragonia to have many excellent molecular properties and emotional benefits. Subsequent preliminary research has led to encouraging clinical experiences both with his patients and with selected individuals in the USA.

Fragonia represents the planetary oil of the 21st Century. Its scent,  a floral teatree note,  is universally accepted and loved. With an incredibly balanced chemical composition, it has the capacity to accomplish, simultaneously, the rapid [healing] activity of two well known, frequently used, essential oils. Beyond its physical capacities, Fragonia has the proven ability to excel in the emotional and spiritual realms.

“It is an extremely appealing oil. I have not come across anyone who does not like it.

From the chemistry approach, the striking element is the extremely well-balanced composition of the oil. In fact, as I was working on the results of the GC analysis,  it occurred to me that for the very first time I was gazing at a unique formula. I am not referring to the individual molecules that make up the oil here. I am referring to the respective proportions of the families of components between them and the proportions of the individual components between them, especially inside the monoterpenols.

I was amazed to find out that the sacred number known as the golden proportion was expressed almost perfectly through the chemistry of this essential oil.

What does that realization mean? It means we have to go beyond the analytical chemistry in order to understand, in an holistic way, the unique power of harmonisation and rebalancing of this [essential] oil.

It is not just that this oil is useful for the respiratory system or various infectious conditions which has been proven by tests on different strains of bacteria.

It actually has the capacity of [creating harmony] in the person who uses it. For instance one patient told me right on the day after starting the EO of Fragonia, she had been able to express and release blocked emotions that were never authorised to be expressed before, even during a long period of therapy. Later on, she explained that she was able to make peace during her dreams, even with people who had passed away.

I am convinced that this essential oil has a great potential for both medical aromatherapy and for English-style aromatherapy.”

NOTE: Fragonia™ is a registered trademark, belonging to Paperbark Oils.

– Marie D. , Clinical Aromatherapist
In seeing and [being] in contact with some of the people that tried it …this [essential] oil is helping people move through issues or [deal] with whatever they have been stuck with in their lives in a very easy way, and with strength, all with just one drop given to them on a cotton ball.

~ Helped P. stop smoking. After giving this person 1 drop on a cotton ball to try, P. kept the oil on the cotton ball and continued to use it and left it in his truck overnight….where P. smoked.

I gave some oil to some people that had been at a group, that I go to sometimes. One of the guys, I had told about the oil was there and wanted to try it. So, then some of the others, after the group was over, also were wanting some on a cotton ball.

P. happened to be there. He called me four days later to say thank you, and that the [guys] want to see me continue with what I am doing and to continue working with the oils. P. told me that they felt it was so important and how much they appreciated the time and the oil. [He] told me [he] kept the cotton ball and was able to quit smoking.

~ T. told me that she could see so much light in her head, after applying the oil to [her] upper chakras. T. had been using the oils and even a drop everyday, internally. T. felt the oil was clearing her throat chakra and helping her transform with the oil.

She feels [she] doesn’t have anything to transform on a mental or emotional level, just the physical body. So, [she] felt the Fragonia was helping bring up physical clearing, from [her] throat and chest. Likes the oil.

~  S. P. was given 1 or two drops on a cotton ball. Used it on their skin…could immediately feel this oil working through all of the pathways, on both sides of their brain. S.P. is a very gifted and strong healer…can see meridians and pathways inside the body. Told me this oil would be good to help their clients who have neurological difficulties…[in] energy healings with meridians, massage, and crystal bowls.

S. P. was able to buy a home..right after they tried the oil. I could see that they were able to do this after, three years of knowing them and seeing them in a stuck place, in regard to moving and getting their own place. I feel this oil helped them accomplish this.

~ M.D. used the oil on the thymus, heart and upper chakras right away. Their chakras became very open and expanded. The oil of Fragonia was used in liquid bath soap, in baths, [as well as] internally approx. 1 drop a day for a few weeks, and off and on for the last two months.

M.D. has seen a great deal of transformation and literally has left old patterns, programs, and heal[ed]l at such a fast rate and on a huge scale, on all levels, that they believe that the oil had a lot to do with this. They were working with some other healing modalities along with the oils.

~ M. used the oil  given to them. M. was able to quit their job and move away… something they had wanted to do for at least three years. So, right after taking the oil, within a week or two, they left their job and moved to another location. I feel this took place because of the oil and that it was something that they were wanting to do, but weren’t able to do, until they had the oil.

A world renowned medical Aromatherapy expert, Dr. Daniel Penoel is one of the pioneers of the therapeutic uses of essential oils, the cornerstone of his practice since 1977. He is highly respected in the medical world through his rigorous approach to teaching and clinical work. He continues to research and author books on the applications of essential oils in medical and holistic settings. As a medical adviser he is regularly invited to lecture at major International Institutions and Conferences.

He is the founder of Medical Aromatherapy and has taught across Europe, USA, Australia, Japan and Canada over 15 years. Dr Penoel is also the founder of Quantum Aromatherapy® a brand new concept which revolutionizes our way of understanding and using Aromatherapy through the ‘double understanding’: the corpuscular approach and the undulatory approach. He may be reached via penoelschool@gmail.com